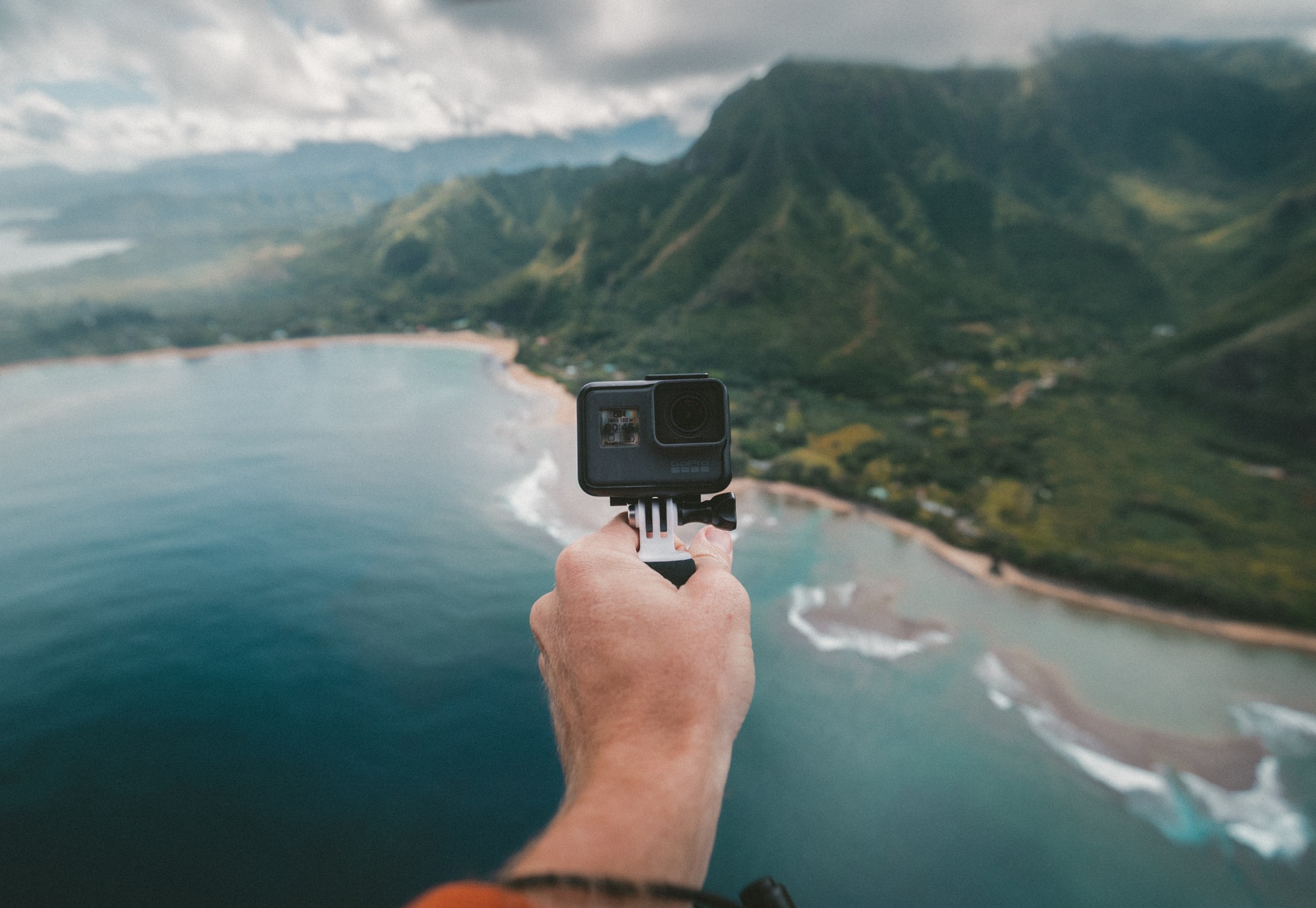 Issue #33: A sleeping semiconductor giant and a market-leading camera maker that’s found a recipe for growth 🚨

Doctor-turned-investor Michael Burry has never been the most popular man on Wall Street. He has a long history of betting against the prevailing wisdom and finding value in unpopular places.

Burry’s recent moves include bets against market darlings Tesla and Cathie Wood’s ARK Innovation ETF and warnings that meme stocks and cryptocurrencies are deep in bubble territory and set to crash.

Burry is easy to hate, but he’s often been right. He made hundreds of millions shorting the US housing market in the runup to the 2008 crash and his funds have a ten-year return of 326%.

Burry’s core investment belief is summed up in one quote:

“If you are going to be a great investor, you have to fit the style to who you are. At one point I recognized that Warren Buffet, though he had every advantage in learning from Ben Graham, did not copy Ben Graham, but rather set out on his own path.”

Michael Burry’s path was contrarian value investing, and it’s made him unpopular and very rich.

Intel designs and manufactures a range of advanced microprocessors for multiple applications. R&D is continuous and the Company regularly introduces upgraded products to maintain its position in a highly competitive market.

Intel products are used in notebook and desktop computers, servers, tablets, phones, Internet of Things, retail and manufacturing devices, and others.

Unlike most competing semiconductor companies, Intel manufactures its own chips, at facilities in Arizona, New Mexico, Oregon, Ireland, Israel, and China. Intel is spending $20 billion on new factories in Arizona and is seeking a site for a $100 billion city-sized US manufacturing campus.

Intel’s US plans will take advantage of US government incentives designed to promote domestic manufacturing.

Over the last decade, Intel has suffered manufacturing shortfalls and delays in new product introductions. That has allowed competitors, notably AMD, to gain market share. New CEO Pat Gelsinger has implemented an ambitious plan to put Intel back on top.

Spending on manufacturing capacity is part of that plan. Intel will build excess capacity to allow it to manufacture chips for other companies. New products are being readied for introduction and Intel is working with another tech stalwart, IBM, to develop foundational technologies for faster, more efficient chips.

On August 23, Intel announced a deal to develop a domestic foundry system to apply leading edge custom semiconductors to the Dept. of Defense, an important validation of the company’s tech prowess.

Intel’s new Alder Lake processor is expected to deliver a 30% performance boost with reduced energy consumption. These products will power ultralight laptops, mainstream laptops, and desktop PCs, and will be available in late 2021 or early 2022.

Both social media and much of the retail investor community treat Intel as a dinosaur. The company is seen as the past, while up-and-coming firms like AMD and Nvidia draw most of the attention.

Intel gets social media mentions that are in line with a company of its size and prominence, but there’s little excitement. You can see a predictable bump in discussions surrounding a quarterly report release, and then a return to a flat average.

While retail investors have been ignoring Intel, hedge funds have been quietly snapping up shares. Data from Insider Monkey shows well over 100 funds with holdings in Intel, the highest figure ever.

Why $INTC could be valuable:

The global semiconductor market was worth $425.96 billion in 2020. Growth slowed slightly in 2020 but is expected to maintain a CAGR of 8.6% through 2028. Artificial intelligence, the Internet of Things, and machine learning are expected to be major drivers of new growth.

Smaller, faster growing companies may get the attention, but Intel remains a dominant player in the semiconductor market. Intel’s TTM revenues are almost 6 times those of leading competitor AMD. That cash flow gives huge R&D capacity and important resilience.

Intel may not be a growth titan, but its financial position is extremely solid. The operating margin is 29.33% and return on equity 22.19%. There’s even a 2.6% dividend, which is entirely sustainable with a modest payout ratio of 30.11%.

Intel is undervalued relative to its competitors. The Company trades at 11.89x trailing earnings and 2.85x sales. AMD trades at almost 40x earnings and almost 10x sales. The semiconductor industry as a whole is at 33.31x earnings and 7.3x sales.

Intel is bringing multiple new high-performance products to the market across a number of product categories such as personal computers, data centers, and graphics processors.

Investors may have written off Intel’s technological prowess and R&D capacity prematurely. Intel holds over 4,464 patents in AI alone and many more across other branches of technology.

Intel may have become less aggressive during its years of unquestioned dominance, but competition from AMD, NVidia, and others may be just what it takes to wake a sleeping giant.

The bull case for Intel rests heavily on high expectations for products being introduced in late 2021 and early 2022. If these products fail to live up to expectations results could be affected.

Intel’s investments in US manufacturing are designed to exploit US government incentives to encourage domestic manufacturing. There is a broad bipartisan consensus behind this initiative, but politics can always change. A withdrawal of incentives could make these investments less profitable.

Over the last year Intel has suffered from manufacturing shortfalls and product shortages that have hurt some of its revenue. The Company will have to overcome these constraints to achieve growth.

The positive expectations for Intel are also built heavily on the belief that the new CEO will be able to improve efficiency and re-energize the company. If Mr. Gelsinger is unable to achieve his very aggressive goals for Intel, performance may fall short of the higher range of expectations.

Bottom line: Intel faces uncertainties, but at this valuation, they are already priced in. $INTC is too well placed financially to sink much below current levels and could see substantial appreciation if the new products live up to the hype.

GoPro essentially invented this niche and has dominated it since its inception. The Company regularly introduces upgraded models with technology that competitors cannot match, justifying the relatively high product cost. GoPro holds over 1000 US patents.

The current flagship Hero9 model offers front and flip-up rear LCD screens and can record video in up to 5k quality with 14.7MP screen grabs. It is waterproof to 33 feet, offers advanced image stabilization, and its battery life is 30% longer than that of earlier models.

GoPro sells a huge range of mounts, modifications, lighting options, and other accessories to enhance the value and usability of its cameras.

GoPro is increasingly selling through its own e-commerce platform, which offers higher margins than sales through other retailers. Direct-to-consumer sales were 35% of revenue in Q2 2021.

Social media mentions of $GPRO have been declining to flat over the last 3 months.

This chart is most notable for what isn’t there. The August 5 release of Q2 2021 earnings produced only a minimal increase in retail investor buzz. That’s interesting because the contents of the report were generally very strong.

One of the major takeaways from the Q2 report was that it answered a running issue that this Reddit comment raised:

“You realize the subscription is due to them offering $150 off Gopro's if people do a year of $50 subscription? Everyone is going to cancel very soon. You cannot analyze based off these subscription numbers.”

GoPro introduced its subscriber program in 2018 and broke the 400,000 subscriber mark in August 2020. If subscribers were joining solely for the product discounts, we would be seeing evidence of subscribers leaving the program.

Instead, the Company has described high subscriber retention rates and expects subscriptions to break the 2 million mark by the end of 2021.

The low level of retail investor interest appears to be largely a product of the Company’s reputation as a product market overperformer but a financial underperformer. GoPro products have dominated its market throughout the Company’s history, but the Company has consistently lost money.

Now that $GPRO is introducing higher-margin products and sales channels and approaching profitability, investors have lost interest and are no longer paying attention.

💸 Signal: David Einhorn of Greenlight Capital has purchased 2.65 million shares of $GPRO in 2021, increasing his holdings by 265%.

Why $GPRO could be valuable:

The market is being propelled by the increasing popularity of video-based social media and the need for social media influencers to provide top-quality content. The portability, durability, and mountability of action cameras make them the preferred choice for these applications.

The image and video quality and features of newer action camera models is on par with that of much bulkier equipment, making them essential for professional videographers and making them competitive with conventional video and still cameras.

The name “GoPro” is a dominant global brand that is synonymous with quality action cameras. Users who want high quality and a diverse range of accessories automatically turn to GoPro.

GoPro’s stock value has long been held back by the Company’s inability to sustain profitability. The emergence of the high-margin subscription business and direct-to-consumer sales have addressed this challenge. Analysts expect $GPRO to achieve profitability by the end of FY2021.

Professional investors are moving into $GPRO stock. 40 hedge funds are currently holding shares, up from a previous high of 28.

The COVID-19 pandemic had a substantial impact on $GPRO, which saw a revenue decline from 2019 to 2020. If there is a resurgence in COVID-19 cases and restrictions that impact could be repeated.

GoPro currently dominates its market niche, but it competes against large, well-established camera companies. If these companies introduce products matching or exceeding GoPro’s products, GoPro’s business could be affected.

GoPro’s dominance in its niche is a product of the Company’s ability to continuously introduce new and upgraded models. This requires substantial R&D expenses. If GoPro fails to stay at the front of the product development curve its business could suffer.

GoPro’s current trend toward improved margins relies heavily on subscriber revenue and direct-to-consumer sales. If growth in these categories falls short of predictions GoPro might not achieve profitability as forecasted.

Bottom line: GoPro’s history of financial underperformance has dropped the Company off the radar of many retail investors. The combination of industry-leading products, a rapidly expanding market, and a new higher-margin business model looks set to break that cycle and enable long-term growth and profitability.