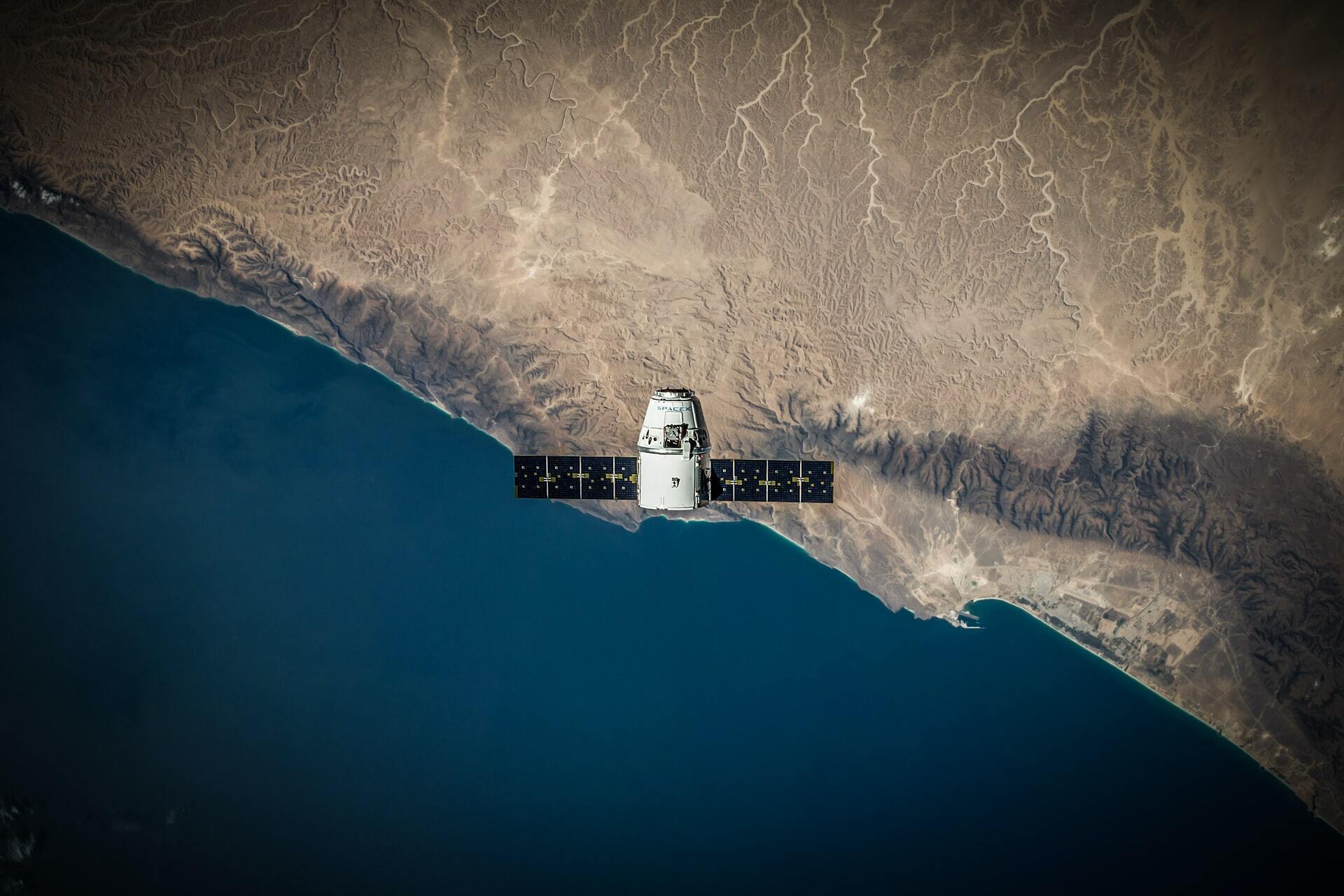 Issue #31: A semiconductor leader stepping into the spotlight and a space stock with worldly revenues 🚀

One of the ways we find opportunities at Ticker Nerd is by analyzing social sentiment data.

This data can be used in two ways:

Today we’re looking at two stocks that have largely been ignored by retail investors. The social mentions for these stocks are almost non-existent.

Sometimes a stock that’s not being noticed can be just as interesting as one that is. This approach can make it easier to get in early if you have a medium to long-term investing horizon.

ON Semiconductor produces a range of compact, energy-efficient semiconductors.

$ON sells its products to a range of industries for an extremely wide variety of products and functions:

This diversity reduces the Company’s dependence on any single industry or product.

ON Semiconductor divides its operations into three segments.

Unlike many semiconductor companies, ON Semiconductor owns and operates its own fabrication plants. The Company has facilities in multiple countries in North America, Asia, and Europe.

ON Semiconductor is almost invisible on social media stock market forums. Since July 1 the Company has been mentioned 14 times on Reddit, less than one mention a day. Many of these mentions are in posts dealing with the entire semiconductor sector.

95.61% of the floating $ON shares are held by institutions, another indication that retail investor interest is relatively low.

ON Semiconductor has traditionally been a “boring stock”: a steady, reliable presence in its industry but not a high-growth company that was pushing the industry forward. That identity did not attract attention from retail investors.

Recent changes in the company, which we’ll discuss below, have largely flown under the radar, as we can see from the lack of discussion.

"Last year, Starboard Value, a top activist hedge fund, bought a significant stake in ON, touting that it is an undervalued scaled asset. And given the track record of Starboard selling and merging analog semi companies, could it be ON in the running for Samsung instead of Samsung?"

"I'm holding $ON and they keep meeting earnings goals, so I've made out with it. NASDAQ isn't pivoting on semi shortages though, it's just a hurdle that we will jump over. It's a sector that should bloom with the infrastructure bill, be patient. America won't let an important supply chain falter”

💸 Signal: Ken Griffin of Citadel Advisors has acquired 2.7 million shares of $ON since Q3 2020.

Why $ON could be valuable:

The Semiconductor Industry Association expects sales to increase 19.7% in 2021 as production bounces back from the pandemic and recent production shortfalls.

The semiconductor industry is expected to grow at an average CAGR of 8.6% through 2028.

As we mentioned earlier, ON Semiconductor has traditionally been seen as one of the less exciting players in the business. That is changing rapidly.

In late 2020 former Cypress Semiconductor CEO Hassane El-Khoury took over as CEO of ON Semiconductor. He replaced Keith Jackson, who had run the company since its spinoff from Motorola 25 years ago.

El-Khoury has moved aggressively to put ON on a competitive growth track. Q2 2021 results indicate that he’s succeeding.

ON also boosted its guidance for the 3rd quarter, suggesting that they believe that this growth rate will continue.

El-Khoury has transformed the company’s image as well as its nuts and bolts. The company recently changed its name to a racier Onsemi and drew attention to committing itself to developing environment-friendly solutions and eliminating its own emissions by 2040.

$ON has a trailing P/E ratio of 34.35, which is not exceptional, but the forward P/E, taking the surge in growth into account, is an attractive 15.15. Its price to sales ratio of 3.09 is less than half of the industry average of 7.04. That suggests that the company is undervalued relative to its sector, at least on the basis of sales.

ON Semiconductor has also significantly reduced its debt load:

21 analysts currently cover $ON, with a consensus “Buy” rating. The average price target is $53.42, 28% above the current level.

ON Semiconductor operates in a highly competitive industry and will have to devote significant resources to R&D to maintain its competitive position.

$ON’s customer orders are generally made 26 weeks before delivery, and prices are fixed at the time the order is made. A rapid increase in raw material or production costs could have an impact on results.

The company relies on raw materials from a range of global suppliers. Any supply interruption could affect production capacity.

A significant economic downturn or an escalation of the pandemic could affect demand for products that use ON Semiconductor chips, particularly high-cost items like automobiles.

Bottom line: ON Semiconductor has shifted into a new gear and jump-started its business model, with impressive results. Retail investors, for the most part, haven’t noticed. With over 95% of the float in institutional hands, attention from individual investors could move the stock quickly.

For more on the new CEO’s vision for the Company, see this interview.

Iridium provides global communication and data transfer services. They offer unbroken communication to aircraft, ships at sea, and any business or individual that is regularly out of traditional network coverage.

Iridium also designs, manufactures, and sells satellite phones, Internet of Things Terminals, and other devices designed to connect to its network.

The Company serves clients including the US and other governments, the maritime and aviation industries, emergency services, transportation, and a wide variety of industries.

The Iridium 9575A handset, sold only to the US government, is the only commercial handset that meets the NSA’s encryption requirements for top-secret voice communications.

In 2019 Iridium closed a seven-year $738.5 million contract with the U.S. Space Command to provide a variety of products and services. The first revenue from that contract was realized in Q1 2021.

Iridium’s primary operating cost is the replacement of satellites, which happens once every 10-15 years. The Company completed a replacement cycle in 2019.

Perhaps surprisingly for a high-tech space stock, Iridium is another company that is almost invisible on social media. In the last month, the stock has been mentioned exactly once on Reddit.

Iridium is also a stock primarily held by institutions. 370 institutional owners hold 96.27% of the float. ARK Invest and Blackrock own 26.6 million shares between them. That’s almost 23% of the float.

Iridium has everything that normally makes a splash among retail investors: a high-tech product, captive markets with minimal competition, steadily increasing revenue, and holdings from some of the world’s most admired investment gurus. It’s still flying largely under the radar.

One explanation for that may be the trading history. From early 2017 to January 2021 the stock soared from $8.30 to $53.94. That got attention. Since then it has retreated to the $40 range and traded in a narrow band around that level.

Stability isn’t exciting, and when a stock is stable short-term investors look away. Given the very high level of institutional ownership, that stable band could be a solid platform for future appreciation.

"I think my first options trade will be some IRDM calls. That baby is going to space when Aireon is live and the Sat network is certified for aviation. You have NATs, NAV Canada, Enav, and Harris on board."

"In the next 3 years, more than 25 million new Iridium satellite subscribers are projected. Very recently Globalstar did a similar agreement in January 2021 and just GSAT spiked 250-300% in just 2-3 days. Iridium definitely could be the next, because they are in a stronger position than Globalstar in the satellite and space-tech markets.”

Why $IRDM could be valuable:

The mobile satellite services market is expected to grow at a 7.3% CAGR through 2026.

Iridium has a massive competitive advantage in its primary market. No other company offers full global coverage. Customers who want reliable coverage anywhere will come to Iridium.

Many competitors are proposing ambitious systems, but Iridium has a working system in place that is already serving some of the world’s most demanding customers.

Iridium’s relationships with the US Department of Defense and others are a powerful advertisement for the system’s reliability.

Iridium’s major expenses are behind it, with the new satellite network in place. The Company has raised its 2021 outlook and approved a $300 million share repurchase plan.

Iridium’s revenue growth has been steady and continuous. Analysts covering the company see growth accelerating in 2021 and 2022.

If Iridium meets those estimates - and the Company has a recent history of beating estimates - that would be a year-to-year revenue bump of 30% in 2021. Analysts forecast the Company’s loss to drop to $.02/share in Q3 and Iridium could see profitability by Q4.

After Iridium completed the $3 billion investment in the new satellites in 2019, the Company’s debt rating was upgraded by S&P Global Ratings, which pointed out that the Company can now take a “capital spending holiday” and focus on paying off debt. Iridium has reduced its debt every quarter since 2019.

A technical failure or a satellite collision with space debris could affect Iridium’s systems, causing communication failures and damaging the Company’s reputation for reliability.

Iridium is heavily regulated, by the FCC and other agencies in the US and their equivalents in other countries. Changes in regulatory regimes or actual or perceived violations could affect Iridium’s business.

Bottom line: Iridium is an unusual thing - a “space stock” with a fully mature, deployed product that is serving clients and earning money. While most of the space sector is selling promises and aspirations, Iridium is expanding its revenues and building toward profitability as it pays off its recent capital investments.